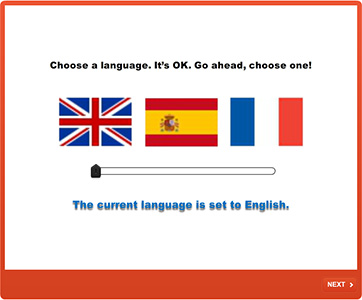 There are likely plenty of explanations of ways to create a multi-language course using Articulate Storyline, but like opinions on the internet, what’s one more?

The method I’d like to show uses single-threaded development, not branching. Branching is certainly easier to develop, because you can create separate slides for each language, however, there are some potential issues with that method:

What I want to show allows the user to change whenever they want and the course will immediate adapt. While I’m showing uses for multi-language, this method could also be used for a character choice (male or female) or any number of ways you’d want to switch between characters or roles during a course. So let’s get started.

Here is the link to the demonstration of what I’ve put together. In this case, I used a slider (using Storyline 2) to choose between languages, but you could also just make them clickable buttons just as easily.

This uses triggers and variables, of course. Each time the slide loads, it checks to see what the language variable is set at based on the user’s most recent selection. If you slide to each language on the first slide in my example, you’ll see the text adapts immediately. This is due to a trigger telling the page to reload (jump to slide) any time the variable changes.

On the next slide in the example, there are two things going on:

What’s nice is that only the language elements (in this case, screen text and audio narration) have to change. Anything else on the slide, including images or animations, don’t have to change or be redone. And if any of those elements have to be updated, you only need to edit a single slide, not one for every language branching slide you created.

Once you have a content slide created, you should just be able to copy that slide throughout (maintaining the integrity of the upper-right flag menu, in this case) so it doesn’t have to be recreated.

So how was this all done? Here is the Storyline 2 file I created with this if you’d like to follow along. These steps describe this multi-language set-up, so if you’re doing something different, use appropriate variable names and such.

This is a pretty simple slide, showing only a female character, a talk bubble, and narration. Only the talk bubble text and narration have to change. Although, if you wanted to create a unique character for each language, you could do that also and follow the same steps below. In my example Storyline 2 file, I didn’t categorize objects by language, but it might be advisable to make it easier to turn visibility on and off as you’re editing and arranging items on the slide.

Now if you run the course, you’ll see the talk bubbles and narration associated with the selected language is the only thing you’ll see on each page, and you’ve done it with a single thread of slides, not branching.

Make sure none of your slides are set to “resume saved state” or the “shift-on-the-fly” function won’t work. However, even if you don’t need the slides to instantly change, this method will still work, as the intent is a single thread of slides (for hopefully easier editing and no duplication of slides) vs. branching.

I’d love to hear how this works for you if you decide to try it, and if you have questions, don’t hesitate to ask!